We race Sunfish every Sunday afternoon from late May through mid October and the official schedule is posted on our calendar. We welcome beginning racers and competitive racers. Everyone is extremely helpful to get newbies up to speed. We conduct racing workshops on beach a few time througout the summer to review everything from rigging to rules. And after racing refreshments add to a welcoming social atmosphere. 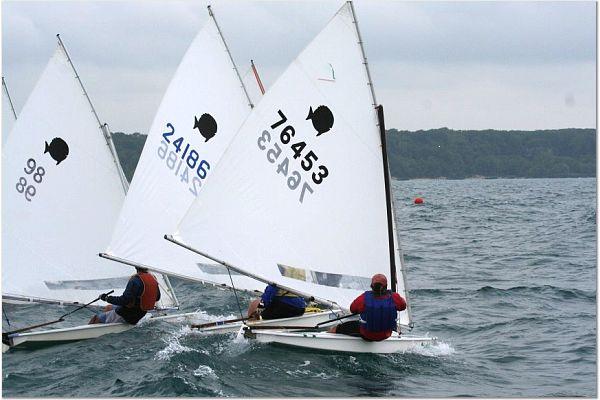 We break the season into two racing series - a summer series with the last race on Labor Day, and a Fall series through mid October.

link to US Sailing - The Racing Rules of Sailing

Club members may enter any regularly scheduled race. A sailor is entered as a participant in a series by starting and finishing at least one race in that respective series. Guest sailors may sail with the permission of any member of the “Sailing Committee”, consisting of the Club’s Race Director, Fleet Captain, Commodore and Vice Commodore. Guest sailors will not be scored.

No race in which there are fewer than 4 participants that start the race will count in the series standings.

Notices will be posted on the Race Notice Board located at the club boat compound at Lake Bluff beach or through digital communication from the Sailing Committee.

Any changes in the sailing instructions or race schedule will be approved by the Sailing Committee and posted before Noon on the day it will take effect.

Summer Series: Races are scheduled for Sunday afternoons beginning in late May, as determined by the Club’s calendar for that year, continuing thru Labor Day weekend and ending with the Commodore’s Cup Race on Labor Day.

Fall Series: Races begin the Sunday after Labor Day through Late October, as determined by the Club’s calendar for that year.

The Club may, at its discretion, suspend racing on a given Sunday in order to support other local or regional Sunfish regattas. Notice of such fact will be either contained in the Club’s calendar or communicated with all racers at least 24 hours prior to the scheduled race.

All races will be on Lake Michigan in an area adjacent to the Lake Bluff beach, which, in the judgment of the Race Committee, will allow for fair sailing conditions.

The descriptions below show the courses the approximate angle between legs, the order of rounding marks, and the side on which each rounded mark is to be passed. 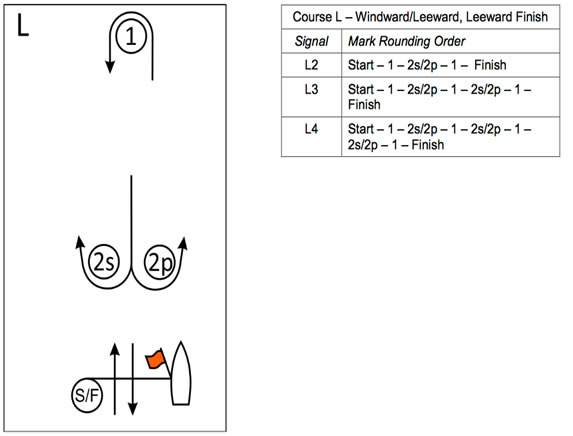 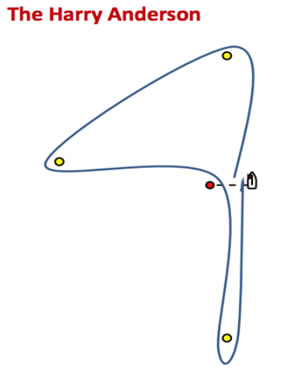 In addition, the Race Committee may utilize windward offset marks and leeward gates at their discretion.

The Race Committee may, in its discretion, establish other courses to be sailed on a particular day, but may do so only after notifying all racers in a skipper’s meeting prior to launch.

Marks will be the Club’s racing buoy marks, which may be either round red buoys or orange tetrahedrons. The starting and finishing marks are described in instruction 10. "The Start", and instruction 12. "The Finish".

Races will be started in accordance with Racing Rule 26 in The Racing Rules of Sailing (standard 5 minute start sequence). At its discretion, and provided all racers for that day have been notified, the Race Committee may use “Appendix U – Audible-Signal Racing System” to start races (three minute dinghy start system).

The starting line will be between a staff displaying a flag on the race committee boat at the starboard end and a round orange buoy at the port end.

Individual and general recalls shall be conducted in accordance with Rule 29 of The Racing Rules of Sailing except when Appendix U is in use. The race committee will attempt to hail boats that are over early but failure to do so or failure to be heard by boats over early is not grounds for redress.

If no competitor has crossed the starting line within 5 minutes of the starting signal, the race will be abandoned.

No race will start after 4:00 PM unless otherwise instructed by the Club’s
Sailing Committee or such person acting as Race Officer for that day’s racing.

The race committee or officer in charge can postpone or abandon any race if, in their judgment, conditions warrant such action.

The committee boat and safety boats shall render assistance to any boat or sailor needing help. All sailors shall be guided by Fundamental Rule 1 - Safety of The Racing Rules of Sailing regarding helping boats in danger and life-saving equipment. In addition, LBYC requires competitors and the Race Committee to wear life-jackets at all times while on the water except briefly while adding, changing, removing or adjusting clothing or personal equipment.

The Low Point Scoring System, appendix A of the US Sailing Rules, will be used with the following changes:
A.) Each boat finishing a race and not thereafter retiring or being disqualified, or being granted redress under The Racing Rules of Sailing, shall score points equal to her finishing position.

B.) For boats that did not start, did not finish, retired, were disqualified, or did not come to the starting area shall be scored as specified in The Racing Rules of Sailing, Scoring, Appendix A. A boat scored Time Limit Expired – TLE will receive points equal to the number of finishers of the race plus two points. If a boat has entered any race in a series and finished such race, she shall be scored for the whole series.

D.) Any member who participates in a sanctioned Lake Bluff Yacht Club sailing regatta or a sanctioned Sunfish racing event as either the regatta chair or as a member of the regatta race committee and such duties cause the member to be unable to race in such regatta, may, upon application with a member of the Sailing Committee, be given special consideration in scoring. The scoring, computation of averages, and limitations on use of this scoring method shall be the same as for racers contained in paragraph 16 C) above.

E.) The best 60% of the total races for each racer during the series will be counted to determine the final standings, (40% throw-outs).

17. Penalties at the Time of an Incident

A) Appendix V, Alternative Penalties of the Racing Rules of Sailing shall be in effect.

Rule V1 - provides that the penalty for breaking a rule of Part 2 (When boats meet) shall be that the boat breaking the rule may take a one turn penalty instead of a two turn penalty. However, if the infringement occurs within the zone around a mark (other than a starting mark), the penalty remains two turns.)

A.) Protests shall be written and lodged with a representative of the Sailing Committee after the last race of the day and within one hour after the time of the last boat's arrival at the beach. This may be done electronically utilizing US Sailing’s Racing Rules of Sailing app.

B.) The protest committee shall hear protests in approximately the order of receipt beginning as soon as practical after racing or as they may otherwise inform the parties involved.

D.) Should all parties to the protest agree, the alternative, expedited protest procedures set forth below shall apply, otherwise the protest will proceed according to the Racing Rules of Sailing.

E.) Alternative, Expedited Protest Procedures:
i) The protesting and protested skippers must meet immediately after the conclusion of racing. Each skipper shall then select another member of the fleet to act as a juror.
ii) The two skippers and the two jurors repair to a private area. The protester has one minute to describe the incident including when and where it occurred and the rule believed broken. The protestee then has one minute to present his/her side of the case. The protesting parties and the jurors may question each other. If any of the four want a witness to resolve a matter of fact, the witness has one minute to present his / her testimony.
iii) The jurors then have one minute to reach a decision. In the event the jurors cannot reach a decision, the protest shall be disallowed. The jurors inform the Scorer of their decision.

F.) Decisions of the protest committee will be final.